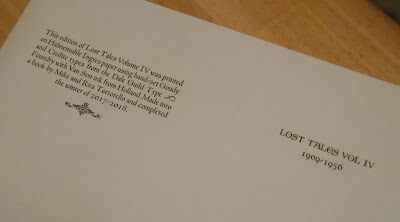 As the year draws to its conclusion, we are wrapping up another project at the press.  Mike tells me he only has the title page left to print and an introduction.  The test print has been done on a beautiful Color Sime illustration from the Dunsany estate and we will be moving forward getting the illustration printed.

Once these are complete, I will begin hand binding Lost Tales Volume 4, another collection of previously unpublished stories written by Lord Dunsany.

For details or to preorder this limited edition hand made letterpress book, please go to our website.

Posted by Rita Tortorello at 8:18 AM No comments: 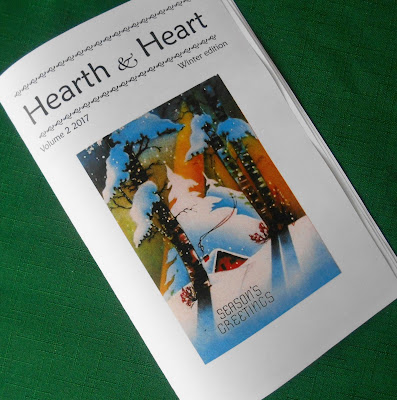 If you're in the mood for some Winter stories may I suggest you check out Hearth & Heart 2017 Winter edition.  Self published original short stories of magical realism by Rita Tortorello.  Presented in half page zine format.  Stories to read by the fire on a cold winter eve.

Or you might try Winter Tales, a letterpress chapbook of short stories inspired by the elements of fire and ice.  Just the thing for winter reading.  Also by Rita Tortorello.

You can find out more on our website peganapress.com

Posted by Rita Tortorello at 6:55 PM No comments:

Once Upon A Time 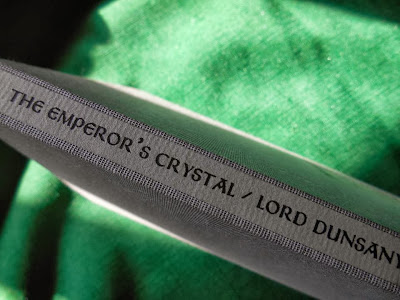 In 2013 Mike and Rita Tortorello released the second collection of stories written by Lord Dunsany available from Pegana Press.

There were 92 copies printed, but somehow, we were missing some pages for several copies.  Since one sheet accounts for four pages, it's a pretty big deal to mislay even one sheet of a book.

Because of those missing pages, we had listed our Lost Tales Volume 2 as being sold out.

Now we have remedied that situation and we have 6 more copies available, which means we will have 6 complete box sets to sell.

Rita is in the process of binding those last 6 sets, and they should be finished before Volume 4 is finished being printed.  Most fortunately for us the end papers we used for Volume 2 are still available.  So we'll put in an order for those sheets and while we're waiting Rita will be cutting binder board and sewing the copies of Volumes 1 and 3.

At last the orphan copies of Lost Tales Volume 2 will find their proper place with collectors who will be able to enjoy them.

To reserve your set of the first three volumes of Lost Tales go to Pegana Press  Lord Dunsany boxed sets.

And to reserve your copy of Lost Tales Volume 4.  Volume 4 has an interesting story to it, which we will be telling here on the blog soon.


Posted by Rita Tortorello at 11:05 PM No comments: 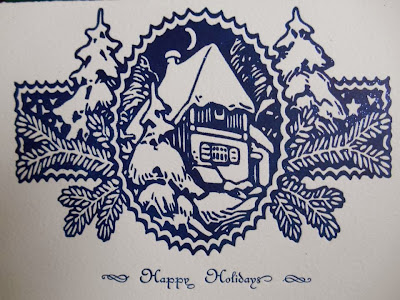 We've been keeping busy at Pegana Press.  Mike has been hard at work setting and printing the next release,  and we will talk about that in another post.  It is nearing completion.

We put in an order for letterpress type about 6 weeks ago to replace our type which is showing signs of wear.  As it turned out, there wasn't enough to fill the order, and so now we're still looking.

Sunday, we spent the day making our most popular letterpress holiday card.  It's always a festive event for us, working together to make these fun cards.

Rita is between book binding jobs and is getting ready for a tabling event at the local gallery here in town.  She will feature her short story zines Hearth & Heart, our letterpress chapbook of her stories--Winter Tales, and our letterpress holiday cards. 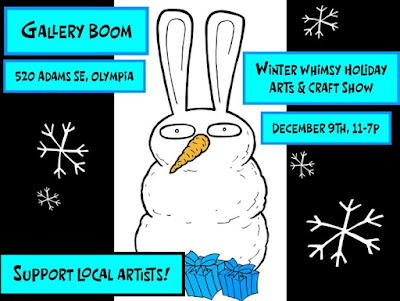 If you're in the States and are celebrating the Thanksgiving holiday, we wish you a very joyful holiday celebration this week end.  And we wish to say how thankful we are for your support of Pegana Press.

Posted by Rita Tortorello at 9:54 AM No comments: 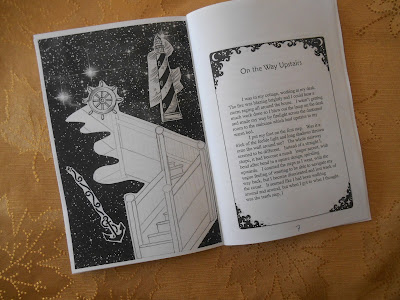 Mike is busy typesetting and printing the next Dunsany publication.  And Rita has begun producing her zine Hearth & Heart again after a 2 year absence.  It was released today and is available through out website at https://www.peganapress.com/hearth---heart-volume-2.html

Mike and Rita have also started a Patreon page for Pegana Press.  You can see what we're up to on Patreon at https://www.patreon.com/peganapress


Posted by Rita Tortorello at 6:24 PM No comments:

Here's what Mike is up to this morning at Pegana Press.  Printing Page 1 of the current book, we thought we'd share some of the process with you.  As these rollers turn, they evenly distribute ink to the press.

Death Does Not Take A Holiday 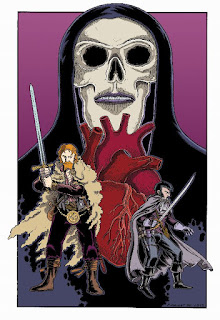 I spent the last week folding, scoring, trimming and gathering  sheets for our latest release, Nehwon Vision by Fritz Leiber, with new artwork.  It's a tremendous story from Leiber, a timeless tale of Death, Fafhrd, and the Gray Mouser played out in 20 heartbeats. Well worth checking out.  More information and how to order can be found here.

The new audiobook , The Vengeance of Thor  should be available to download and purchase sometime in the next month.  A truly immersive rendering of rare stories by Lord Dunsany.

Next up a new Dunsany release!
Posted by Mike and Rita at 2:58 PM No comments: 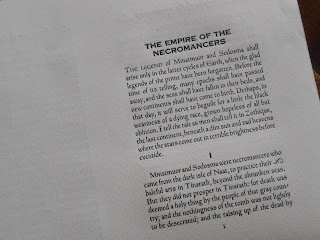 I'm nearing completion of a very limited and beautiful chapbook for one of Clark Ashton Smith's stories from Zothique, the Earth of the Dying Sun.  The edition will feature a new illustration rendered by Robert H. Knox, well known for his Necromonicon Press artwork.

The chapbook is being letterpress printed on snowy white watermarked German Fine Edition paper and will be hand sewn into blue gray French heavy covers with ornate titling.

Zothique Prism is available to pre-order and will begin shipping in about a month.  Here's a link to the website page with more information.