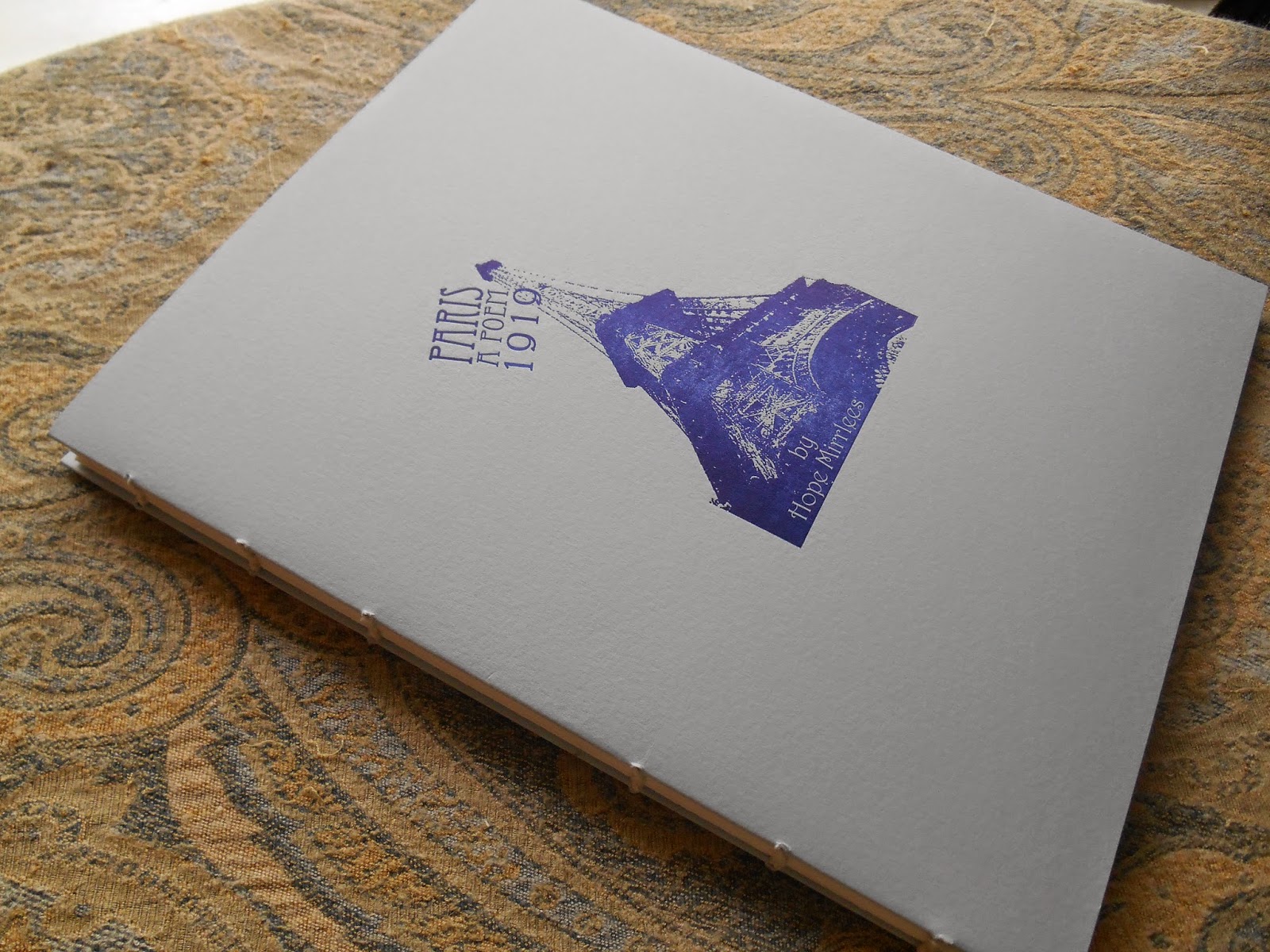 ***Special Offer*** We have a small number of copies available in a hand sewn Coptic binding with soft cover of French Canson heavy stock paper in gray, cover illustration printed in reflex blue ink.  These are the copies from the original Pegana Press run which did not go to Ars Obscura for binding.  There are less than 1 dozen of these available.​

If you are a collector of modernist poetry, and have despaired of ever finding a copy of Hope Mirrlees work, Paris A Poem, then we at Pegana Press have good news for you.  We were tidying up around the press, and found our unbound copies of Paris A Poem safely tucked away in a box.  They were just waiting to someday become books, so using a Coptic stitch, I hand sewed one of these volumes with a paper cover, and it looks wonderful.

We need to free up some space around here and make room to work, so we have made a special price on this soft cover Coptic bound Pegana Press 2010 edition of Paris A Poem by Hope Mirrlees.

Take a look at the soft cover and hard bound edition on our website.   The beauty and subtlety of this poem is something you will want to explore.

More behind the story Hope Mirrlees, Paris A Poem


Posted by Rita Tortorello at 4:31 PM No comments:

Emperor's Crystal Back In Stock

Last week I posted that I would be spending the next two weeks binding our unbound supply of The Emperor's Crystal.  They are once more available to purchase on the website.

I'm also binding more copies of The Age Of Malygris this week.

Mike is in the planning stages of Lost Tales Volume 3.  The stories have been tentatively chosen, the paper has arrived and we have been discussing layout and design.

I want to thank those who have generously contributed feedback about The Age Of Malygris.  We have just started posting the customer reviews of Poseidonis Cycle 1 on the Clark Ashton Smith page, and also here on the blog under Customer Reviews.  So if you want to know what actual customers think of the book, you can read it there--and again, we are very grateful for the response we're getting.

That's all for now.  I'll get back to the binding table now.  Have a great week. 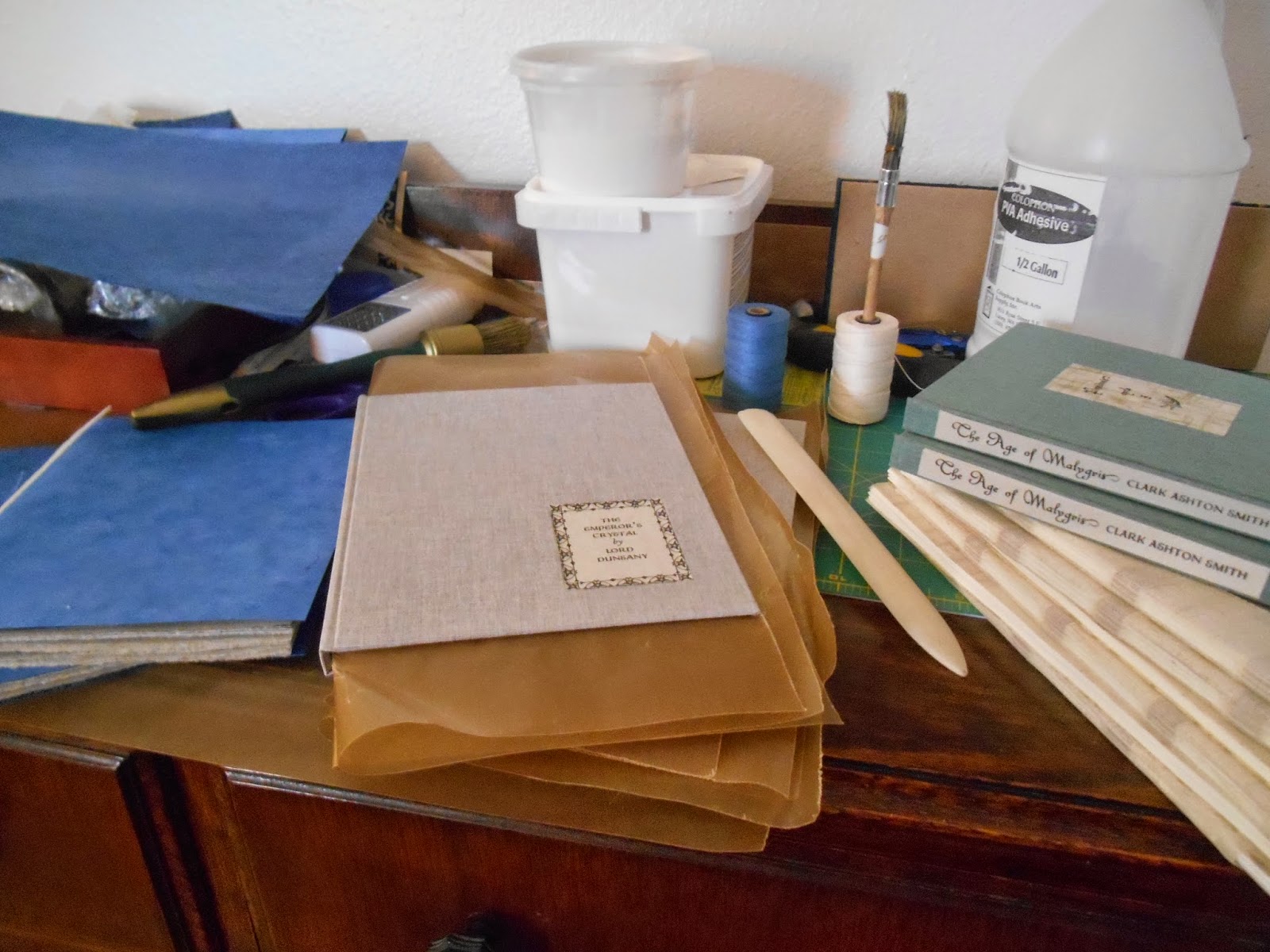 Posted by Rita Tortorello at 10:58 AM No comments:

Getting Back To Work At The Press 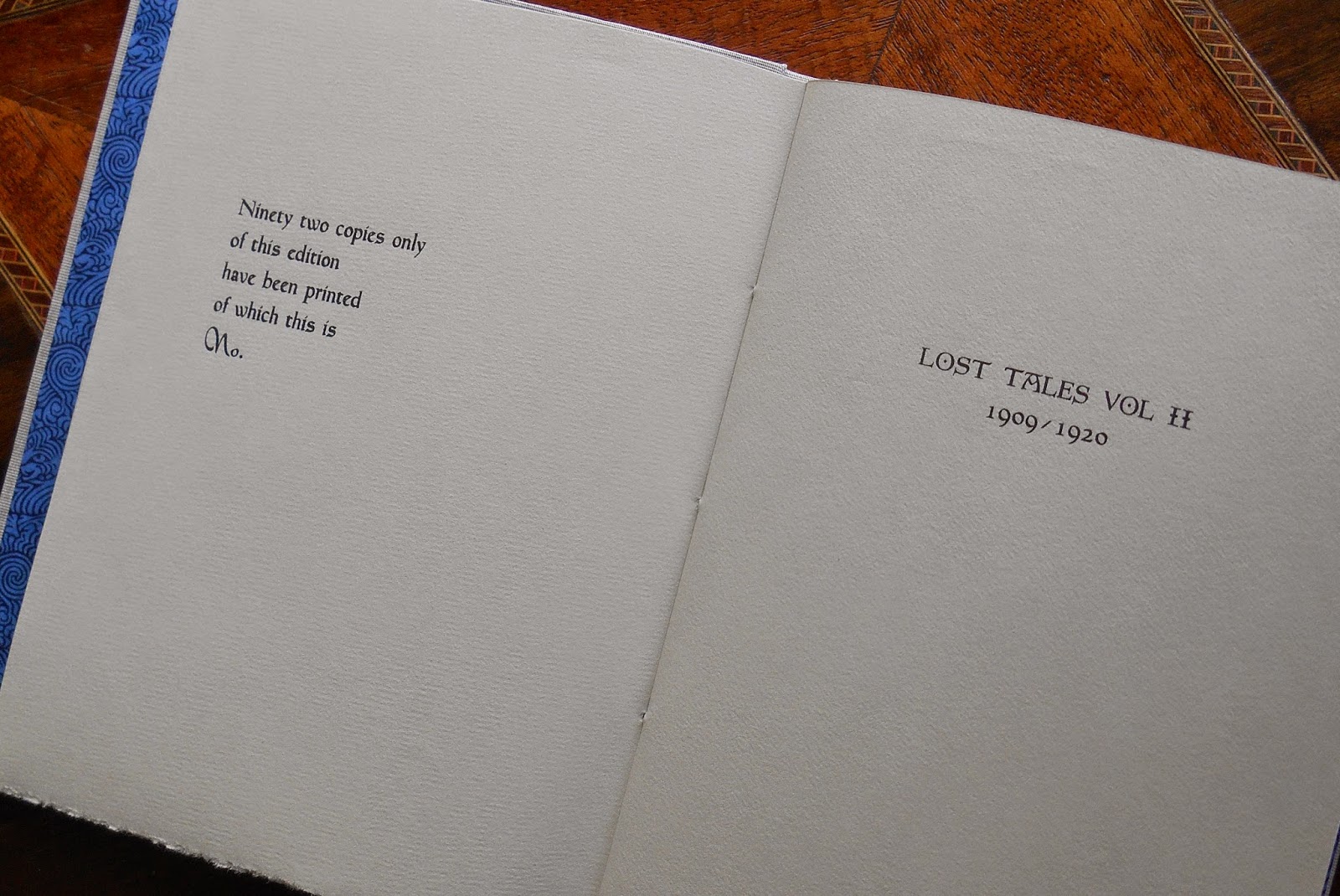 I had to take a little time off to file the income tax return.  It took almost all of this last week, but now it's completed, and I am sooooo ready to get back to binding books.

News for The Emperor's Crystal

About 3 weeks ago, we sold the last deluxe binding of The Emperor's Crystal, that we had in stock.  We still have unbound copies, so I will be spending the next two weeks binding them.  They should be available to purchase on our website before the end of April.

I am also still binding the last copies of The Age Of Malygris.

And Mike is working on Lost Tales Volume 3!

That's all.  Just a quick post to update what's going on at the press...Now back to Work!

Hearkening now the voices of the crowd,
Have you forgot the faint Parnassian music
We heard between the bracken and the clouds?

Posted by Rita Tortorello at 11:27 AM No comments:

Crafting The Age Of Malygris: Design and Intent 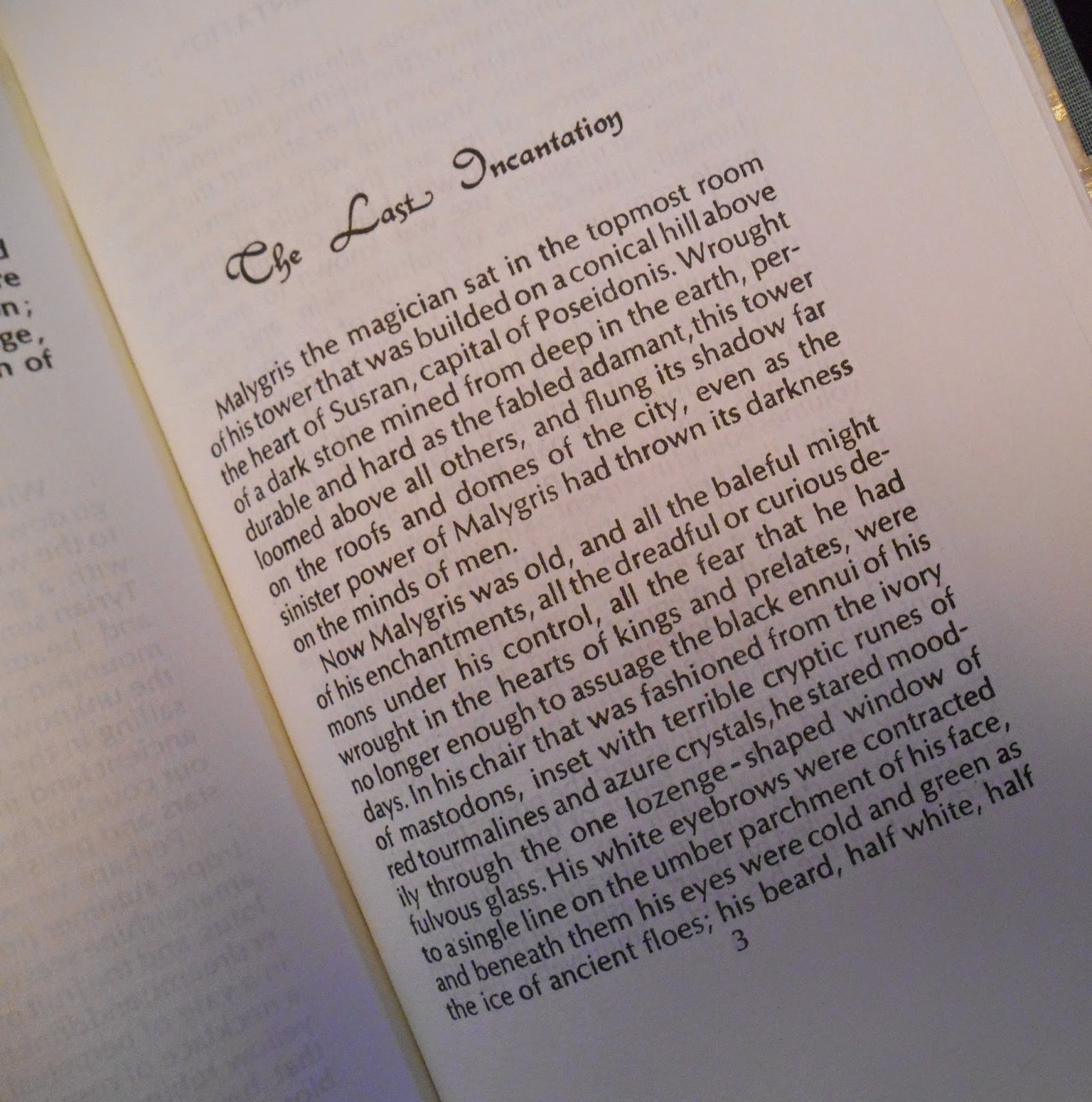 Here is some background on what went into the making of The Age Of Malygris from a printers perspective.

The font used for the body of the text is Optima, designed by Hermann Zapf for a german foundry in the early 1950's. I chose it because it's cool, detached feel seemed to lend itself to Clark's dispassionate glimpses of a remote age. I think it also allows the ornateness and beauty of the prose to be the focus. When designing the book, I pictured a scribe or monk slowly transferring the text of a crumbling tome that may have come from the chamber of Malygris. The paper is german watermarked with the feel and look of parchment; Hahnemühle has been making this kind of paper for over 400 years. I really wanted the book to feel OLD. Keeping the craft of true bookmaking alive to pass on is valuable to me as well. The type is distributed(put away) after the print run and will never be done again. It takes about 4 months of painstaking work to create books like this but worth the effort. It also gave me the chance to speak and work with Donald Sidney-Fryer which was incredible.

I too have these stories in my library in several versions; Arkham House, Weird Tales, Ballantine, etc. Other than the late Roy Squires beautiful chapbooks, none of the CAS books were made to truly enhance and convey Clark's work. Their materials and manufacturing were based on cost; and designs were based on standardization.

Don't get me wrong, I love all those versions, but as a CAS lover I would always want a beautiful edition in my collection and I thought it was time to create one.

The inclusion of Clark's original illustrations and DSF's prelude, as well as a poem not published since The Dark Chateau become the setting for the jewellike prose he left for us.

I plan on finishing the Posedionis stories in Cycle II after doing a new Dunsany and then probably the Zothique stories.
Posted by Rita Tortorello at 9:28 PM No comments:

A Word Of Encouragement To Writers

Life is full of stories.  We are all story tellers.  A writer is someone who writes them down.  Not always to be published.  But because it is a way of crafting words.  A writer writes down words, because we must.  Whether poetry, story, lyric, essay, journal, editorial or blog...whatever form the written words take...for whatever purpose they serve, no matter the label we put to the words, we do this because we must.  These words we write are not ours alone.  They are thoughts from the collective which we all receive, and if we are of a certain temperament, we are inspired to write them down, as we individually interpret them.  We do not create them.  But we craft them in a certain fashion, and in so doing, we are deeply touched by them.

I was inspired to post this here because we have met so many writers (I refuse to use the word 'aspiring' because either you write or you don't) through Pegana Press, and I sometimes hear people expressing discouragement.  For whatever reason you write, please continue to do it.  If it brings you joy, then write to experience the joy of it.  If it tortures you on some level, then write to express that.  In it's expression, you will experience a level of transformation by the very act of writing it down.  Don't compare your form of expression to another.  Only continue to hone your own skill by constantly writing words on whatever you can find to express them.  Do it because you are a writer.

Posted by Rita Tortorello at 11:10 AM No comments: